Capacitor as a Charge Well

Home/Embedded Systems, IoT - Internet of Things/Capacitor as a Charge Well
Previous Next

Capacitor as a Charge Well

This is simple experiment I conducted to see effect of capacitor as a charge well/ charge pump to provide current burst in intervals.I had an old cell phone battery and wanted to use it for running my small alarm clock which works on single AA battery. Now a look at datasheet of battery shows capacity of 1100 mAh. I assumed it lasts for 6 months.

The cell phone battery has voltage of \(3.2V\). Instead of putting clock in parallel with a voltage divider, I put it in serial with a potentiometer of \(5 k\Omega\). 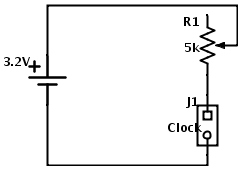 Now I turned the pot to find maximum resistance at which clock still runs. It turned out to be \(\approx 1k\Omega\). But just the resistance with battery would draw \(\approx 3.2mA\). Which could mean:

1. Clock has huge resistance of \(11.5 k\Omega\) or,
2. Clock has some lower resistance, but need intermittent current bursts.

This gives a good opportunity to verify role of capacitor as charge well. So, initially I added a capacitor of \(100 \mu f\) in parallel with clock. After this addition, clock would run for \(4-5\) seconds and stop with second hand vibrating in situ.

I thought this might be due to excess capacitance, so replaced the capacitor with \(1 \mu f\). 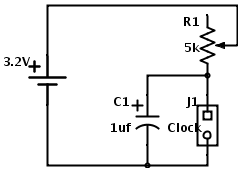 Now it started working smoothly. So again I tried to turn the pot till clock stops working. As expected, maximum resistance now increases to \(1.9 k\Omega \).

About the Author: admin

Hey! Nice to see you here!

Any cookies that may not be particularly necessary for the website to function and is used specifically to collect user personal data via analytics, ads, other embedded contents are termed as non-necessary cookies. It is mandatory to procure user consent prior to running these cookies on your website.